Women Do Get Treated Differently 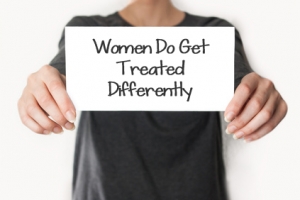 Last week I had a meeting with a coworker. Unfortunately, our conference room was occupied, so we had our meeting in the hallway. A man who works in an office upstairs passed us and said ‘Oh, looks like girl bonding time.’  That comment infuriated me.  If we had been two men, he probably wouldn’t have made any comment.   And if he did, he probably wouldn’t have dismissed us as ‘bonding’ instead of ‘working.’ This is one of many instances I have encountered in my professional career highlighting gender stereotypes and inequality.

When I am vocal, I am bossy and opinionated.   But when a male counterpart is vocal,  he is standing up for himself.  When I negotiate my salary or ask questions regarding my compensation package, I am viewed as difficult, versus the savvy male businessman. I remember growing up, I was frequently called a bitch when I stood up for myself.  But the boys who did the same thing were never called anything. This playground situation is still no different in board rooms across America. These views and biases need to change.

I read Lean In earlier this year, and I would highly recommend the book to any woman. While some parts of the book may not apply to you, I do think the author has an interesting perspective on the differences facing working women. The author recommends finding a mentor and standing up for yourself and your career. She pushes women to sit at the table and speak up during meetings. While  speaking up may get you labeled, I believe this is a first step in a long fight for equality in the workforce.

There have been many articles and even books in response to Lean In, both praising and criticizing Sheryl Sandberg’s ideas. I think you should take the book with a grain of salt (as with most things) and make the book work for you. Maybe you started your own business, and a mentor doesn’t make sense. So maybe instead you decide you want to meet with other successful women entrepreneurs and discuss what you are facing.

Women need to stand up for themselves so we can begin closing the 22 cent gap between our pay and our male counterparts, and gain respect for our work.