Hat’s Off to Mary Margaret O’Dowd 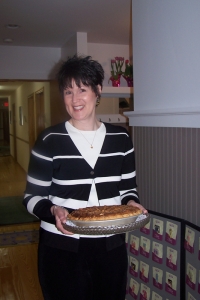 Mary Margaret O’Dowd has left us, perhaps for good.  But not before showing us, by her exuberant example, how to live life fully.

When I first met Mary Margaret many years ago, I was struck by her positive energy.  And energy is one of the defining characteristics of this most amazing woman who has been a long time friend to the Women’s Health Resource Library and to the town of Milbridge.

What many people never knew about this community activist, dedicated volunteer and physical fitness enthusiast  is that Mary Margaret O’Dowd had a full time job.  All the years she lived in Milbridge, Mary Margaret worked as a registered nurse for Maine Employers’ Mutual Insurance Company.  Because she worked out of her home and was clearly very effective in time management, many folks believed her only job was that of Weight Watcher’s leader.

She inspired many people over the years, with her legendary humor and good cheer, to reach their health goals.  Weight Watchers participants claim that Mary Margaret never judged, never chided, but offered encouragement and support at every turn.  Meetings were fun and people looked forward to Mary Margaret’s weekly dose of wit and wisdom.  I cannot tell you the vast number of people who became healthier and happier due to Mary Margaret’s dedicated work.

And she led by example.  MM was a fixture at Fitness Central in Harrington, where she started most days with a vigorous work-out.  Since MM was typically first to arrive, she was eventually given the keys so she could open the center.

MM volunteered in numerous capacities in Milbridge.  Early on, she was a literacy volunteer.  She volunteered at the Milbridge Elementary School and the Milbridge Public Library.  She was on the board of the Milbridge Medical Center, where she served as secretary.  During busy flu clinics at the medical center, MM would often stop in to lend a hand.

When the Women’s Health Resource Library opened in 2005, Mary Margaret graciously agreed to be the first president.  (She did like to tell people that I was holding a speculum in an exam room when I asked her to be president, and she felt like she couldn’t refuse.  Truth is, she was helping cater a Christmas party when I begged her to take on the responsibilities of being president.  She didn’t hesitate.)  It is no small task to head up a non-profit.  But to be involved in a fledgling organization, to get it off the ground as an incorporated business, develop a board of directors, recruit volunteers and act as an ambassador– well it is a huge job.  And Mary Margaret did it with grace, panache, and skill.  I am quite sure we would not have made it through our first year without her leadership and amazing people skills.

Locals and visitors alike will be missing Mary Margaret during future Milbridge Days.  Mary Margaret learned to bake a blueberry pie during WHRL’s very first pie sale.  But it was not her pies that people will remember.  It was her ability to sell pies.  Over the course of 10 years, she sold over a thousand pies by coaxing, cajoling and joking with everyone who got even a little close to her table.  As years have passed, she now has a faithful following who stop in and visit her.  I think they stop for the always delightful visit more than the pie.

Mary Margaret knew how to live a life of joy.  She enjoyed socializing with her neighbors and even started making beer and hosting an annual Octoberfest.

If this all sounds a bit like an obituary, I assure you, Mary Margaret is alive and well and starting the next adventurous chapter in her life.  For the next many years, she and husband Tom Potter will be traveling all over the world, experiencing new and different cultures and living life to the fullest.  Not that living life to the fullest is anything new for Mary Margaret O’Dowd.

Milbridge has lost Mary Margaret to the whole, big, wide world.  But not before she touched countless lives with her amazing energy, warmth and “joie de vivre”.

Our very big loss is the world’s gain.