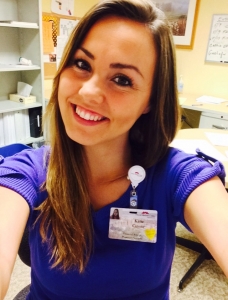 When people used to ask me the question “What do you want to be when you grow up?” I would freeze, get super nervous, and make something up—the first thing that popped into my head. Because the truth was, I had no idea. And that scared the crap out of me. I used to avoid the topic all together if I could. Some people are really fortunate to know what they want to be at a young age. They find something they’re passionate about, learn how to make it into a career, and then go for it. I envy those people. My sister knew at the age of  five that she was going to grow up to be a nurse (well, it was either that or a ballerina), and I’ve truly always admired her for that.

So many things would go through my head when I’d try to decide on a future career. There were just so many options to consider.  What if I picked the wrong one? What if I pursued a profession, then found out I was actually really bad at it? What if I hated it? What if I failed? So many overwhelming questions came to mind. The “What ifs?” were all I could think about, instead of trying to find something utilizing my talents or something I enjoyed.

But I couldn’t help but hope that there WAS something out there I would be good at, maybe even something I enjoyed.  And I was going to go off to college and figure out just what that was.

In the fall of 2008, I enrolled at Thomas College in Waterville, Maine and majored in finance. My teachers, family, and friends were shocked when they heard what course of study I selected. “Just never really seemed like you,” they would say. Well, I chose finance for two reasons.  (And neither reason was because it was something I was good at or something I enjoyed.)  But, 1.) because one of my role models, whom I trusted very much, studied finance and he told me it was a great idea and 2.) because the only thing I knew for certain was that I wanted to be rich & successful. And I had a pretty good idea that a finance degree was the fastest way to get me there.

Are those two of the best reasons to major in something in college? Probably not. But, fast-forward six years later. I graduated Magna Cum Laude with a Bachelor’s degree in finance and a Master’s Degree in business administration. I’m currently working at Maine Medical Center in Portland as a financial analyst/supervisor in the pharmacy department. And, guess what I’ve learned? You will never stop hearing that ultimate question, “What do you want to be when you grow up?” It just gets slightly altered to, “Where do you see yourself in 5 years? 10 years? 20 years?” (I think because you’re technically considered “grown-up” now…)

The thing is, I don’t freeze up, get super nervous, or try to make something up anymore. Because one thing I have learned in my “experience” is that it’s okay not to know what you want to be when you “grow up”. Heck, I’m still trying to figure it out. You don’t have to have all the answers. But, what you do need is motivation, the right mindset, and a willingness to learn. Did I pick the right career path? Am I good at it? Do I enjoy it? Will I fail? I still ask myself the same questions today. The only difference is I now trust and believe in myself.  In due time, I’ll figure it out.  And I’m okay with not knowing, at least for a little while longer.