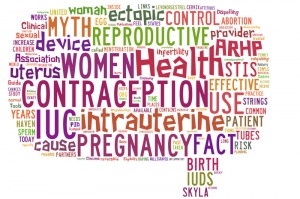 There are many types of birth control. Learning about all the options can help you choose the one that’s best for you.

This is about a method called intrauterine contraception (IUC). If you think IUC might fit your needs, talk about it with your health care provider.

What Is Intrauterine Contraception?

Intrauterine means “inside the uterus.” With IUC, a health care provider places a tiny plastic device in the uterus (womb). Those devices are shaped like the letter “T.” They have short, thin strings that hang down a little from the cervix (opening to the uterus). You can’t feel the device, and the strings stay inside your body. Partners typically can’t feel the strings during sex.

Three types of intrauterine contraception are available in the United States:

One contains copper (ParaGard®). It has no hormones.
The other two contain a hormone called levonorgestrel (Mirena® and Skyla™). Levonorgestrel is a progestin—a hormone that is in many birth control pills.

Why Do Myths About Intrauterine Contraception Exist?

Today’s IUC types are not the same ones women used 25 years ago. Some IUDs used in the past caused problems, and they were taken off the market. Some people confuse old IUDs with the newer methods.

Some Myths and Facts About IUC

Myth: Women who haven’t had children can’t use IUC.

Fact: IUC does NOT cause infertility and does not hurt your chances of getting pregnant in the future. There was a concern in the past that IUC caused the spread of sexually transmitted infections (STIs). If STIs aren’t treated, they can scar the fallopian tubes and prevent women from getting pregnant. (Fallopian tubes connect the uterus to the ovaries. Sperm travel through them to fertilize an egg.) Research shows that today’s IUC does not cause STIs and does not lead to infertility. Women who use IUC should see a health care provider if they have a new or unusual discharge or pain in their pelvis.

Fact: IUC does not cause abortion. IUC prevents pregnancy. ParaGard, Mirena, and Skyla work by keeping a woman’s egg and a man’s sperm from meeting. With ParaGard, copper repels sperm, so they don’t have a chance to fertilize an egg. The hormone in Mirena and Skyla thickens the mucus in the cervix, and that keeps sperm from reaching the uterus.

Myth: A woman who has had an ectopic pregnancy shouldn’t use IUC.

Myth: A woman who uses IUC and develops an STI or pelvic inflammatory disease (PID) should have the IUC removed immediately.

Fact: Women who use IUC and develop an STI or PID rarely need to have the device removed. When a woman develops an STI or PID, she should be treated with antibiotics right away. She can keep the IUC in place if her symptoms get better after 72 hours (3 days). If the symptoms don’t get better in that time, the IUC should be taken out.