Diary of a DownEast Girl – I Have Arrived? 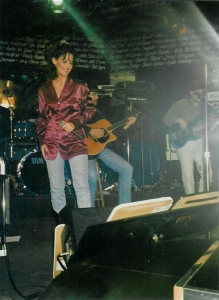 So here I am in Nashville, Tennessee. And as I peruse my way through the numerous one way streets that empty out into two way streets that quickly transition to one ways streets again, I realize I need guidance. I soon spot a Johnny Walker tour bus filled with tourists. They are all hoping to catch a glimpse of the stars while soaking in the sights and sounds of Music Row and the downtown honky- tonks. I slide in behind the bus and soon I am making my way through the city, learning where everything is, memorizing streets and how they all intertwine with one another. I soon break away in search of a place to crash and stumble upon the Broken Spoke Saloon which is attached to the Ramada Inn. Unbeknownst to me, it is located in a not- so- great part of town, but hey, that makes it a learning experience, right? Thus begins my couple of months sleeping in hotels or crashing on the floors of empty apartments that kind folks have offered up. All the while, everything I own is stuffed in trash bags in my car, which makes finding wrinkle free, matching outfits a bit of a challenge.

I finally secure a place to live in White House, Tennessee, 30 minutes north of the city. And I land a job waiting tables during the day at Pargo’s, a restaurant chain out of Virginia, owned by Shoney’s Inc. I also begin working, a few nights a week, serving drinks at the Broken Spoke Saloon. On the nights I don’t have to work, I am “sitting in” at various notable clubs, such as Tootsie’s Orchid Lounge, Hall of Fame Lounge, Stockyard’s BullPen Lounge, Carousel Club and Barbara’s in Printer’s Alley. To be clear, “sitting in” means you tell the band leader or club owner that you are interested in singing a song or two with the band. Then they get you on stage if they’re cool with it. I remember the first time I was on stage in Nashville was at Barbara’s in Printers Alley. Tim McGraw and his band were playing and he was super cool to me, he said “Sure” and I got up and sang the Eagle’s classic, “Desperado.”

A few months later, I was still working two jobs and singing as often as I could. I was even dropping off my demo tape to record labels on Music Row, who politely took it but I’m sure never gave it a listen. I soon realized thousands had this same dream and tactic. I did enjoy being an extra in a music video for Tracy Lawrence. This meant that for over eight hours, I stood on my feet as part of the “crowd scene” and didn’t get paid for it, except for the snacks and the pretty cool opportunity to hang out with Tim McGraw (again), Toby Keith and Shania Twain. The video was for “My Second Home” and if you really concentrate, you can see the top of my head in the front row to the left of the stage!

So my first year in Nashville was both exciting and exhausting. Sleeping on the floor was getting old and folks just mechanically telling me I sang great but then brushing me off was defeating. Many times, I wanted to throw in the towel and join the Peace Corps, but I carried on, anxiously waiting for the next turn of events.