How I Became A Whale Researcher 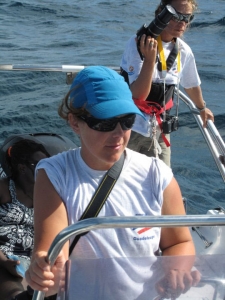 I’ve given countless speeches about whales to diverse groups of people around the world, but when I sat down to write this blog, I realized I’ve never really talked about how I became a whale biologist. Now that I examine my career path, I am starting to appreciate how hard I’ve worked to get where I am. Nearly all of the important choices I’ve made in my life have served to advance my career in this field.

When I was young, I was fascinated by the ocean and marine life. I used to spend hours poking around in tide pools, watching sunfish at the lake, reading books about the Great Barrier Reef, and watching nature documentaries about anything living on or under the sea. I would beg my father to take me out fishing, and it was a huge treat when I was allowed to go out lobster fishing with a cousin or uncle—I couldn’t wait to see what was in the trap! As I got older, I asked my father to take me whale watching in Bar Harbor on my birthday, and while I don’t really remember my first official whale sighting, I’ll never forget those trips.

There was little doubt in my mind that I wanted to be a marine biologist when I grew up, so after graduating from Narraguagus High School in 1996, I headed straight to Maine Maritime Academy to learn about Ocean Science. While there, I learned how to be a scientist and a sailor. They taught me how conduct research projects from hypothesis to report and how to drive a boat. While MMA is not one of the most well-known schools for marine biology, I am certain that the hands-on training I received there has been invaluable during my long days at sea now.

During my first few summers at MMA, I worked as a naturalist aboard the very same whale watch boats my dad took me out on for my birthday. I was required to identify marine mammals and birds, record them, and tell the public about what they were seeing and why. Those summers solidified my fascination with whales, and I knew I had to try to work with them for the rest of my life. What I didn’t realize is how difficult it would be to transition from loving whales to getting paid to study them! There are many people around the world who have the same fascination with whales and it’s a highly competitive field. I knew I would need to work harder and go farther than anyone else to make myself stand out and get hired. I started volunteering for whale research organizations while I worked for NOAA as a hydrographer. I put in long hours and did the dirtiest (chopping up dead whales) and most boring (entering hundreds of records into the computer) jobs, for free. Eventually I had enough experience to land a short-term job as a right whale aerial observer in Florida—basically, we flew around in small planes and counted and photographed right whales. After that, I landed more and more jobs like these; they only lasted a month or two and they required me to move all over the place, living out of a duffel bag for years. While I loved travelling, and I loved the work, I knew I couldn’t be a transient forever.

My first permanent job as a whale researcher came when I was hired by the Provincetown Center for Coastal Studies (PCCS) (http://www.coastalstudies.org/) as a humpback whale research assistant. I was in charge of photographing and identifying the humpbacks that visited the Gulf of Maine region each year. In addition, I assisted with whale rescue and disentanglement, and with mass stranding events in Cape Cod. I worked about 80 hours a week in the summer, and was able to assist with research projects in Samoa and the West Indies. I learned more at the Center than I ever had before, and the knowledge I gained there helped me focus my research interest into the type of work I do today.

I stayed at PCCS for 4 years before being hired at the National Marine Mammal Laboratory (NMML) (http://www.afsc.noaa.gov/nmml/) in Seattle in 2008. In the past six years with NMML, I have travelled the globe studying whales in the Arctic, the Dominican Republic, Guadeloupe, Martinique, Chile and New Zealand. I’ve learned how to manage very large, complicated research projects and have published several papers in scientific research journals. I learned how to deploy satellite tags on whales and used the tagging data to complete my Ph.D. on humpback whale migration and habitat use. I am now one of the few people in the world who deploys tags on whales and am considered an expert in my field. Sometimes I have to pinch myself to believe it’s real. I have worked very hard and come a long way, but I have a job that I love and that I am good at. I’m not sure there is anything more satisfying in the world than that! I know that this short blog makes the journey seem straightforward and easy, but I can assure you that it was not. The bottom line is that I worked very hard and sacrificed a lot to be where I am today, and I have to say it was totally worth it. I am certain that the next decade of research will be even more rewarding.