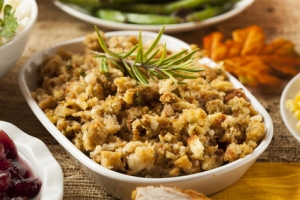 Traditionally, turkey is served twice a year at our house. Its first appearance is on Thanksgiving, of course… and rightly so. After all, according to my husband’s aunt, her not-so-verified family history includes the Mayflower, Plymouth Rock, Pilgrims, and the full cast of characters. Far be it from me to mess with that legend. And besides, I love turkey, the cranberry sauce, the pumpkin pie, and the whole groaning board of over-indulgence. Bring it on!

However, a mere month later, when the leftovers from the Thanksgiving feast have barely been digested, Christmas Day finds us basting an identical bird once again. Yes, while many Americans are celebrating with a beefy prime rib or other festive repast, yet another turkey graces our holiday table. This has been a bone of contention between my husband and the rest of us for years. His argument is a simple statement: “It’s a tradition.” The defense rests.

I beg to differ. The resourceful Pilgrims had quite a variety in their larders even in those early years. Historic documents cite not only wild turkey and waterfowl, but also an ample supply of venison, and an abundance of seafood and fish. The first Thanksgiving was, in all likelihood, a diverse array shared among those who had survived that first grueling year in the New World. Moreover, Christmas, as we know it, was not even observed in Plymouth. In 1621, Governor William Bradford called on his citizens “to worke” on that day and banned “gameing and revelling in ye streets”. Clearly, turkey on Christmas can’t be pinned on the stoic Pilgrims.

Puritan traditions are not debated at all on my side of the family. Crossing the Atlantic from somewhere in France to somewhere in Canada on an unknown vessel, my French forebears never set foot on Plymouth Rock. They brought to another land a very different kind of aesthetic, a mixture of religious faith and merriment that culminated on Christmas Eve as “reveillon”, an all-night party following midnight Mass that featured a lavish meal of many courses. In sharp contrast with the Pilgrims of New England, the French reveled without regret and they did so with recipes that still speak to my heart.

One of their oldest holiday specialties is a meat pie known as “tourtiere”, served as the first course. A savory blend of ground pork and beef, the pie’s complex flavor can range from slightly sweet to spicy depending on the ingredients. Many cooks hold fast to the tradition of adding cinnamon and nutmeg to meat and potatoes, while others keep to a meat filling enriched with onions, bread crumbs and herbs such as sage and thyme. My family takes the latter approach. The mixture is then tucked into a pastry crust and baked until bubbling and golden. The result is beyond delicious!

The next course is often a goose or… turkey. Oops! (Well, I guess I’ve just discovered the origin of the duplicate feast.) Now, if you’re thinking that two turkeys in a month’s time is a bit hard to swallow, I’ll let you in on how I manage it with gusto, enjoying every mouthful. For me, it’s all about the stuffing. The secret is to use the tourtiere ingredients as a dressing. On the day before Thanksgiving, I make a huge kettleful knowing that what doesn’t fit in the bird will go into those wonderful pies or will be layered in hot and cold turkey sandwiches as a delectable leftover. This French-Canadian stuffing has

been used by my parents, my grandparents, and my great-grandparents who always considered it the highlight of the meal. I can’t imagine a Thanksgiving or a Christmas, for that matter, without it.

Perhaps, I really didn’t want that prime rib, after all.

Whatever your heritage, I hope that your Thanksgiving is brim full of fun, special recipes, and gratitude. And, whatever your preference, be it lobster, venison, roast beef… even a turkey encore, it’s a fine celebration if it conjures up the old or creates some new family memories. As my husband would say, “It’s a tradition!”

Mixture should be quite moist without being soupy.

Cover and simmer slowly on stovetop, stirring often to keep from sticking.

*Prepare and chill a day before stuffing the turkey. Always stuff uncooked poultry with cold dressing!

Remaining stuffing can be heated in a covered casserole and served as a side or saved for a later round of sandwiches or pies. For tourtiere, fill a pie pan with meat stuffing, add leftover chopped turkey, if desired. Top with a pastry crust, cut slits for vents, and bake at 425 degrees for 30-40 minutes until crust is brown. If you are lucky enough to have any gravy left from the turkey dinner, drizzling a little on each slice is a decadent addition.

Both Jimmy Dean’s and Bell’s are brands that are family favorites. The flavors are just right for this mixture. Thus, there’s no need to add extra herbs or seasonings. What can I say? It’s a tradition